The recent Yahoo policy banning working from home has become quite controversial spawning many articles and even a highway 101 billboard.  Over the years I’ve managed teams using a range of policies so I have some definite views about what works and what doesn’t in different situations.  And that is the key point…this is not a one size fits all theory but one that is specific to the business and it’s situation at the time.

It wasn’t so long ago that we did not have the tools to make working from home practical.   As I’ve written about here previously, in my early days at Informix – pre laptop, pre internet at home, I would need to go back to the office to work in the evening or weekends.  Those tools and technologies enhanced by web and video conferencing allow us to be extremely effective even when not in the office.

I’ve experienced varying degrees of remote work effectiveness during my career.  When I was at Netscape (post IPO 97-03), the success of the Mozilla project and browser development in general was strongly impacted by key developers who worked remotely.  Their talents would become obvious from their open source contributions and either they would participate long term as key volunteers or in several cases we hired them as employees.  Most of those individuals stayed working in their locations as far away as Europe and New Zealand.  We also had some star employees who had to move out of the area for personal reasons.  What made these situations work well was the proven talent and work ethic of these individuals plus the open source infrastructure to manage their contributions and assess their performance.  There was a critical mass of remote employees that meant that large group meetings were always set up with dial-in numbers and managers were trained to facilitate.  We even had one director who effectively managed a multi-location team from Boulder.  That being said, most employees were in the office most of the time and it was a very collaborative culture.

My next role, ironically given the impetus for this post was at Yahoo.  I was there from 2003-2004 – during the heyday.  It is interesting to note that people rarely worked from home during that time.

When I got to Check Point to manage the Zone Labs division I inherited a very liberal work from home policy.  In addition, Wednesday and Friday were supposed to be “no-meetings” days.   Early on my manager Eyal Desheh expressed concern about the productivity and work ethic of the team.  My first assumption was that he didn’t understand Silicon Valley culture and how this could actually work.  Unfortunately, his warnings were correct.  The issue wasn’t the work from home as much as a lack of drive related to many typical post acquisition HR issues.  The work ethic issues were far from universal but they were contagious and affected everyone and working from home accentuated the problems.  I quickly changed the work from home policy for the people who reported to me.  The “no meetings” policy was changed to not apply to my team nor managers in the engineering organization and it eventually fell away (although managing the amount of time spent in meetings, particularly for engineers is critical).  The transition was difficult and created lots of handwringing but it improved productivity quickly and morale soon after.

When I started at SugarSync I was glad to see that our culture was one of people working primarily in the office.  In January of 2009 we were 13 people – the challenge was great to just get the job done with such a small team.  We couldn’t afford missteps an 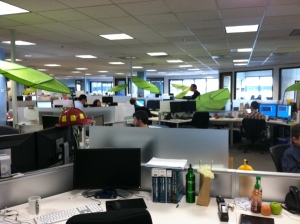 d missed communication and collaboration possibilities by not being together.  We kept that policy going as we hired – it is much easier if the ground rules are clear from the start.  We designed our new office to be a very open setup to foster collaboration.

This didn’t mean it was easy – SugarSync has several people commuting long distances.  We always have had flextime – working slightly earlier or later schedules to avoid the traffic but still we were generally in the office together during the main part of the day.  Of course this doesn’t mean we didn’t recognize that people have life issues that require occasional work from home – a sick child, dentist appointments, plumbing emergencies but those are the exception not the norm.

For a startup in a fast moving industry such as the cloud, the work environment is dynamic and high-pressure.  Challenging problems require creativity and quick teamwork to solve.  I believe we were much more effective at SugarSync by being together.  As the team grew the learning curve was shortened dramatically for newcomers working alongside the experienced people.  Once people were working in our environment and saw the benefits of close proximity and collaboration they understood why it was needed and embraced it.  One of my favorite questions to ask new hires was what surprised them the most about SugarSync – a frequent answer was how they thought we were a much larger team than we in fact were.  I think this was a reflection of the team’s productivity.

Is it always better to be together in the office?  For certain tasks that require extended, uninterrupted time, working away from the office can be more productive (assuming you have an appropriate environment for concentration at the alternate location).  Some roles, like sales or field support by their nature are not in the office.  Many people have critical points in time where they need more time away from the office perhaps due to a health or other personal issue for them or a family member.  Allowing them to work remotely allows key people to stay with the company and maintain project continuity.

So what’s my net on this important debate?  For me it’s clear.  If at all possible, have the team primarily working together in the office during work hours.  If there are critical hires you can only make (or keep) it might be worth considering exceptions recognizing the consequences and need to manage around them.  For a company in crisis or a turnaround situation (like Yahoo) or where there is reason to believe there are productivity issues (again like Yahoo) having everyone much more together in the office may be one of the keys to the turnaround.   For a fast growing startup in a very intense space requiring collaboration and team problem solving working in the office together is important.

Does this make juggling work and personal life less easy – perhaps.  This is why companies need to be reasonably consistent.  If the reports of Marissa Mayer’s in the office nursery are true I would find that to be insensitive to the other parents of babies who are coming to the office without that close access.  We must, after all,  lead by example.  The example that I tried to set was to work hard and collaborate together during the workday.  When not in a crunch time, to leave early enough to have a few hours, including dinner, with the family and then, if needed, get back on line after the kids went to bed (or were doing their homework independently).    As managers and leaders we need to figure out what works best for our businesses and our teams.  These observations are what I have found to be most effective.

10 thoughts on “Working From Home”